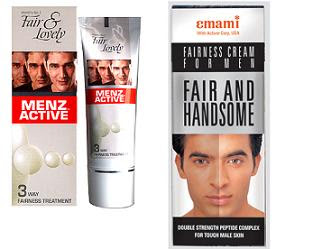 The Recent launch of Menz active , by HLL and Fair and Handsome by Emami has
created quite a stir in the media , with the creation of a new category over night

While the product’s effectiveness and the “promised fair skin” still lingers a
doubt in the consumer’s mind , there is a much major issue that has been
completely overlooked.

Creating a new category (Fairness creams for men) and differentiating is
actually a good strategy , but whats the point of creating a category for
which people don’t have use for ?

When u pose a question such as what makes a man handsome , the
typical reply would be : Masculinity,height, confidence,humor and attire

Do u expect anyone to reply as fair skin ? Impossible !

The ads of Lux ,Fairever or Fair and Lovely usually emulates a typical girl
who aspire to become beautiful and have a fair skin like Aishwarya Rai.
Thus the fairness creams for women ..The aspirations for a guy on the
contrary is quite the opposite.

He tries to emulate a rough and tough , cool guy and probably aspire to become a
Sachin tendulkar or a Christiano Ronaldo or whatever his profession might be.
No one would even think of a concept of becoming fair ,as evident from that
fact that 90 % of the men do not even know the texture of their skin
or exact skin color.

The dream of possessing physical looks similar to another person , is strictly
confined to females and definitely not a guy ( Have u heard anyone
saying I wanna be as handsome as Tom Cruise?)

HUL has come up with survey results,reports indicate, that nearly 25 % of
men use fairness creams . A true marketer has to understand that the product
can be used in multiple ways by both sexes , probably even in a completely
opposite way . The purpose of using fairness creams by these men is not for
getting fair skin , as commonly misinterpreted in that report but actually for
skin protection from sun and to maintain a healthy skin .

The issue under concern is , whether do men really aspire for fair skin ?

So what is the major problem to be solved ? Positioning !

Solution : Adopt a repositioning strategy,and targets the men who worry about
their skin ,and needs a cream,which can protect their skin, and also one that
they can proudly take it with them anywhere

Create an ad , that depicts a salesmen or a traffic police getting their skin burnt
by the sun , and they are in desperate need of a solution to protect the skin.
The product then appears that acts as a boon to all the people who constantly
travel or exposed to the sun for a long time. ( Do not term it skin care ,and
give it a feminine name , like Fair and Handsome)
Probably a “Power Protector” ,”Blue Eyes” or “Freeze” cream can do the trick

Fair skin for men anyone?

Do you know what you want?

Joy of Flying with the King of Good TImes