Skip to content
February 8, 2023
Healthcare / Hospitals
It’s not often that I’m invited as one among selected bloggers by a leading hospital in the city for a mini tour around the campus and I certainly didn’t miss this chance.. Apollo Hospitals, one of the top hospitals in the country (and also one among the top few in the world) , had invited selected bloggers for a mini orientation tour around their premises. This Apollo tour included a visit to various departments, how they functioned and also a meet and greet with some of the key personnel and doctors.

With an inherent fear of hospitals from childhood, I haven’t quite ventured to hospitals much, apart from a rare visit to see a sick relative. So it’s safe to say, that I was quite oblivious on their functioning and didn’t really strive to understand the myriad complexities of their operations.

So the Apollo tour really gave me a fresh perspective on

Having been awarded as one of the best hospitals in the country, there wasn’t any lingering doubts on the quality of doctors, medical equipments and services they provide. This was testament to the fact that  only choice you always have, when everything else fails, is Apollo.

I also got to learn about their “corporate medical checkup” package that allows you to get checked for most things in less than couple of hours . They also have a DNA health testing check, that allows them to safely predict the likelihood of a disease that may affect you at a later stage in life. This could be due to the hereditary genes and DNA’s that may affect, despite leading a healthy lifestyle.(This is something I’m definitely planning to take up in the near future). 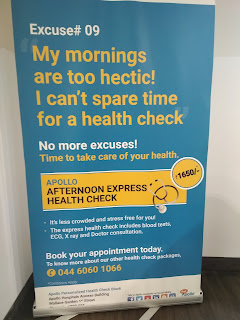 The blogger meetup included a rundown of their key departments including the Critical care units, Blood banks, the fully equipped Ambulance service,cath labs, advanced medical diagonostics and the physiotherapy units.What I saw were not just medical equipment, experienced doctors or facilities, but instead, an earnest attempt to provide outstanding medical service and an exceptional care to make lives better. Department after department, patients are different, but the story is the same. Patients with serious illness, broken bones, scarred faces or even life threatening diseases have approached Apollo and gone back to their old self once again, with a fresh start and a new lease of life. Yes, quality care comes at a price. But when it comes to health , no amount of money can compensate for a peaceful well being and you get the peace of mind here.

My tour to the Physio Department in Apollo Hospital was equally surprising. Half expecting to see just beds with physio trainers, instead I was faced with advanced robotic equipments, advanced body trackers and elliptical cycles that could rapidly improve momentum even on a sprained/fractured muscles. The technology here is simply amazing and I least expected that a robotics machine could actually even make a disabled walk. 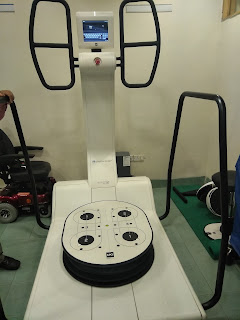 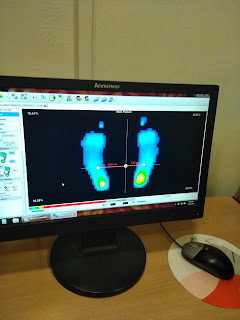 If you’re wondering what the above image represents, that’s a detailed analysis of my foot and heel status. The doctors even advised the kind of shoes and soles I have to change to change my stance, which I had never known would be affecting my walking/running

Marketing in a medical field can be quite tricky. With strict rules against advertising set forth by the Advertising board, hospitals solely rely on a positive word of mouth and campaigning through limited channels.So a coordinated effort to maintain a positive image is critical, even to boost the public’s confidence on a hospital. Their outreach program to fight cancer, raise awarness about preventing heart diseases has been termed a major success and well received by the general public.

A Brief Chat with the Chief Security Officer of Apollo

In short of a epiphany, the conversation with the chief of security in Apollo, Mr.Elango, an ex-Army guy made it an all the more worthy visit. One thing that struck me was his prudent efforts in the “Wear Helmet” campaign. Despite repeated efforts by the traffic police to make people wear helmets, it’s been been not taken seriously. He shared that almost on a daily basis , the no of accident cases they encounter with serious head injuries is on the rise. Not surprisingly, every one of those cases are those with people who never bothered to wear a helmet. The perils of not spending 1000 on a mere helmet has now caused them an irreparable damage to their body and life as well. So if you are reading this, make it a point to never leave home without a helmet, if you are riding a two wheeler or even as a pillion.

After battling a tough 2 month period with the whole nation’s focus on the hospital day and night, Apollo Hospital has successfully stood its solid ground and managed to come out of it in good shape. Despite the circling rumors and the various controversies/theories floating around , the belief/ confidence one has, on Apollo for quality medical treatment has stood firm.

To me personally, a hospital may excel in a lot of things,provide premium rooms with luxury services etc.. But ultimately what it boils down to is saving lives. Every patient who comes, when he’s given full medical attention and ultimately saved, can make an incredible impact to several people around him. This is exactly what Apollo Hospitals stands for and manages to do most of the time. And that’s why it all matters 🙂

Disclaimer : The opinion expressed in the above post are purely based on my personal, honest and unbaised views of this institution.