Skip to content
February 8, 2023
Uncategorized
As an exclusive member of the Cosmos Book club, I happened to receive a copy of an interesting book called The Wrong Turn, written by Sanjay Chopra and Namita Roy Ghose. Juding purely by it’s cover, I mistook this for a romantic drama. The book cover depicts a couple in an embracing position with a caption indicating love and betrayal. However I should admit this book took me completely by surprise, given the theme, the way it was written and a quite controversial subject as well.
No more “judging” a book by it’s cover 🙂 So here you go with the Wrong Turn Book Review. 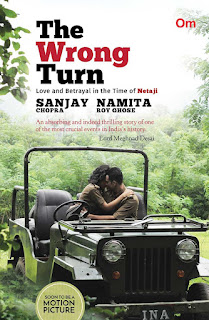 What actually started off as a story set in a sleepy town around Kolkatta, becomes into a complex plot about the freedom struggle of Indian Independence. The fight led by our very own Subash Chandra Bose and his INA led army is the central theme of the novel.

We may have read about several famous wars that happened in World history including WW1, WW2, Battle of Waterloo, Hiroshima war  etc. Yet, when it comes to India’s independence movement against the British, we know very little. We have probably come across only Mahatma Gandi’s non violence movement and his Dandi marches. Yet there were several other movements happening across different states to fight for independent. One such movement was the INA, led by the great leader Subash Chandra Bose.

A story, pretty much untold by anyone, this book is a great revelation to get some insights and truth behind what really happened in Bengal during the period of 1943-1945. There are still so many unanswered questions such as “Was there a betrayal among the ranks?”, “To what extent did it influence the overall movement for freedom”, “What actually happened to Subash Chandra Bose”. The book goes to the grassroots level of the actual fights and struggles INA faced while faced with such an uphill task, made even more tougher b the Indian forces that were part of the British army.
The authors has additionally woven a romantic plot triangle between three two main characters, Deb,Nishonko and the rebel lady, Aditi.

Despite being set in a fictional setting, you can’t help but feel this might be almost in line to what would have actually happened during the freedom stuggle led by Netaji.

What could have been better in the book?
The author has preferred a slightly advanced language than simple English. Most words require looking up in the dictionary to get the meaning. The book is a lengthly read and could have been easily shortened. The pace is also something that requires a nudge. The book cover could also be misleading for so many people who would have been otherwise interested in the book, if they knew about the theme. But nevertheless , barring these minor things, the book is definitely a great read and a must recommend for all book lovers and history loving people as well.

The book is also soon to be a major motion picture and definitely have the potential to be the next biggest hit in Bollywood.