Skip to content
February 9, 2023
Uncategorized
If there’s something I strongly believe, its in the power of storytelling. The creative descriptions, the tone, the modulation, the characters, the plot and the twist , everything has to be woven together for a powerful storytelling. A storytelling, that can leave your audience gape in awe, shock in disbelief and rapt for attention as you unravel one plot after another. Creating an indelible mark in anyone’s mind, its an important art that has to be cultivated right from the beginning. You make the children believe in everything , dream with no limits and that’s where a creative story begins to form . Just try handing out a set of things to a kid.Within minutes, they begin to come up with a story so beautiful ,you could never even imagine how they managed to come up with such a thing. This aspect in them should be encouraged at the very least and make sure the magic is never lost.

This concept has been successfully introduced by Colgate who has come up with a creative magical pack in all their outer covers. These could be cut into individual pieces , each representing a space character or an object. As you guessed it, the central theme for all these characters is “Magical Space Adventure”. This is a wonderful theme that could really encourage kids to put on their thinking caps and get going on a space story. 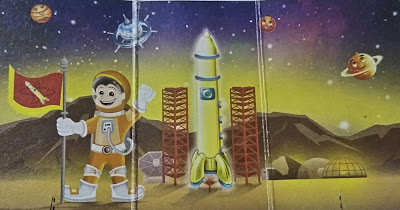 The story revolved around how a group of kids who had won an international space quiz contest, were selected for a top secret space mission. They adorned huge space suits and given laser guns in case they come across any enemy in their space mission. Their rocket finally landed in a special unnanmed planet , after a long journey. The planet, had a dark red surface andminimal lighting that it received from the sun. From the rocket they brought out a space rover which used they used for exploring. As they began venturing, they were suddenly surrounded by weird shaped creatures, alias Aliens. These Aliens began talking in a gibberish language and gave them a strange look. As they slowly started approaching them, the space kids started to dazzle the lasers from the space guns at them. This almost blinded the aliens and within minutes these space kids hit the remaining aliens and captured one of the aliens,tied from from behind and put him in the spaceship.

They quickly began their departure, while the rest of the aliens started charging against them. The spaceship swiftly started its ascent and proceeded on to the next destination.  While it began cruising on its course, the space kids finally heaved a sigh of relief, called up the home base and spoke “Mission 1/n completed An Alien from Planet Neucloid has been captured. We are heading to the next planet to find one more. Awaiting further instructions from home base. Over”

Their story drew inspirations from movies, comic books, cartoon shows, yet it was wonderful that their creativity was still in full force and they applied common sense and whacky ideas to come up with a neat plot.

I’m blogging my #ColgateMagicalstories at BlogAdda in association with Colgate.