Skip to content
January 29, 2023
Uncategorized
One of the most recent tech developments in the media industry is its paradigm shift in focusing on an app based model . Apart from the traditional media channels like TV, Radio and even Youtube , a lot of firms have started engaging through apps / over the top platforms(OTT) for streaming media content, music , movies and even sports 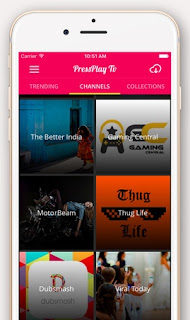 One such large player in this segment is PressPlay TV.  Incidentally PressPlay TV, India’s largest and first ‘Online + Offline’ Independent OTT (Over the Top) platform announced the launch of its iPhone App http://appsto.re/in/PeHGbb.i and for Desktop/Web browser version (http://www.pressplaytv.in/).

This directly enables millions of users in India to directly watch Hindi movies, TV shows, trending internet videos, news, sports, fashion, comedy, and high quality curated content – spanning across more than 50 channels available to stream over the internet. They can do this in the comfort of their homes or while travelling or anywhere they choose to

PressPlay’s CEO has said that the iPhone app will significantly expand their user base, consolidate their position in the smartphone segment and at the same time have a two-fold impact viz. increase in users and at the same time significantly enhancing the average time spent per user on the platform. This will directly make it an even more attractive medium for content creators and advertisers

Beyond Bollywood – Boon for upcoming original content producers
PressPlay TV is innovating not just in the way the content is being delivered but also in the kind of content being offered to users. While offering the regular fare of movies and TV shows, PressPlay TV is spreading its content footprint to ‘Beyond Bollywood’. With more than a million users per month and high time spent per user, it (PressPlay TV) is an ideal platform for upcoming unconventional/original content producers to showcase their videos. The PressPlay TV Hotspot network, already 3000 (going to be 10,000 soon) strong, is engaging users across mobile platforms. The company is already delivering highly localized content across geographies, keeping in view the audience preferences. With the launch of iPhone app the Apple (iPhone) users can continue enjoying their favorite videos after they de-board the train, bus or get out of the Hotspot range.
Increasing content depth
The company has already firmed up licensing arrangements with various leading and upcoming content innovators viz The Viral Fever, Raghu Dixit Project, LiveFame, Fame, PopXO, Shudh Desi Endings, Sportskeeda TV, Lybrate, NewsMeme, Quick Reaction Team, The Better India, Purani Dilli Talkies etc. Big names like Lehren TV, Sun Network, Sony India, NDTV Gadgets, Fever 104 FM, Autocar etc. are also featuring on the PressPlay TV platform.
This enables users to get a comprehensive package that includes videos ranging from 2 minute video snippets to the hour long TV shows, movies and other trending internet videos from all other popular genres with just a click
Links to watch PressPlay TV:

Desktop Browser : http://www.pressplaytv.in/
Android : https://goo.gl/jCenNw
About PressPlay TV
PressPlay TV is a technology company redefining the way video content is consumed on smartphones/tablets in India. Keeping in view that broadband speed is not consistent across various geographies, a mix of strategically placed PressPlay TV hot spots at malls, buses, railway platforms, coffee shops, trains and other high traffic areas along with online streaming over the internet (3G/4G) have been deployed to deliver uninterrupted high quality video content.
PressPlay TV’s business model is advertising based. The company’s USP – viewer captivity and engagement offers very strong value for advertising other brands (other app companies, brands etc.). Another revenue stream for the company will be offering ‘Premium content’. Freemium (Free+Premium content) is the way to go ahead, this model is especially suited for content- based companies like PressPlay.
Funding :
The company is backed by Sequoia Capital and is one of the fastest growing startups in India. The company has already raised $2.2 Million as seed funding, one of the highest in India from Sequoia Capital.
Contact:
You can also reach them at :
White Fish Communications – Anil Nagwani – +91 9811268046; [email protected]

However if you are looking for Best Video converters, you can check out the given link.

Smart Travel to a Dream Vacation with SkyScanner