Skip to content
February 8, 2023
Uncategorized
I was browsing through my Twitter timeline casually when I struck upon a tweet from a journalist at an astronomy magazine. She had mentioned a specific time in which the International space station by NASA’s navigation path would cross Chennai and most of South India. More importantly it was very much visible to the naked eye for those 2-3 minutes in which it crossed
The link for the International Space Station is as follows http://spotthestation.nasa.gov

As defined by Wikipedia, the International Space station (ISS) is a space station or a habitable artificial satellite in a low earth orbit. Being the largest artificial body in orbit , it is very much visible through the naked eye. This space station acts as a mini research laboratory with an inbuilt microgravity and space environment and used to conduct experiments in many subjects such as astronomy, biology, physics, meteorology etc. Ideally, the primary reason for the space station is to test whether the spacecraft and equipment are working fine for future missions to moon, mars etc. 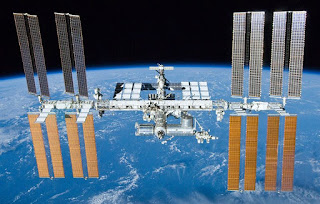 When this ISS passes through a certain region, it’ll appear as a small white dot (similar to a non-blinking star) moving at a fair speed from one horizon to another. The total duration of visibility is roughly around 2-3 minutes, though the overall navigation from one horizon to another is around 10minutes. This is because of the ISS moving in or out of the earth’s shadow. 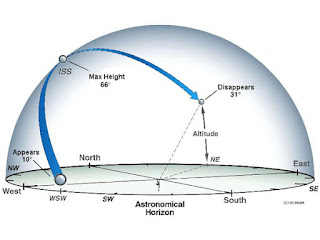 Sightings usually happen after sunset or before sunrise. This is because its visible primarily due to a reflected sunlight at a time when the ground and sky is dark and the station is sunlit. Incidentally the sun can reflect light off the metal structures in the space station causing the phenomenon to happen

We’ve all had experience of viewing a natural space phenomenon occurring in the sky .It was either visible through the naked eye itself or else you have to go to a nearest planetarium and watch it in a Hubble telescope. The event could be a solar or lunar eclipse, a planet like Jupiter or Venus orbiting very close to the earth. There have been cases of sightings of meteors shooting across the sky as well
In this case, the navigation of the space station orbiting across the earth at a very low orbit is an artificial phenomenon but nevertheless an exciting thing to see. For all those budding astronomers or merely star gazers can watch this spectacle. Incidentally NASA also features your photographs of the ISS if you upload or tweet it to them with a specific hash tag
A Russian module inside the space station called the Zvezda is primarily responsible for guidance, navigation and control for the space station.
Watch out for the next sighting happening in India by signing up for their alerts and witness this exciting thing
This blog post is inspired by the blogging marathon hosted on IndiBlogger for the launch of the #Fantastico Zica from Tata Motors. You can  apply for a test drive of the hatchback Zica today.

A dream home with Porcelanosa and 24KLiving

The Power of Zest