Skip to content
February 8, 2023
Uncategorized
Thanks to BlogAdda Book Review club, I was fortunate enough to receive a copy of the latest sequel of “Ramayana, The Game of Life” by Shuba Vilas.
Titled “Shattered Dreams”, a sequel to “Rise of the Sun Prince”, I was quite eager to read the second part of this exciting series as soon as it came out, after being absorbed completely in the first part
The Game of Life is a unique novel that explains the story of Ramayana in a very simplified language added with a parallel explanation of the principles in today’s terms.
Book 1, the “Sun Prince” enlightens us the story of Ramayana, which starts in Ayodhya and traverses through the life of Rama and Sita and ends with their wedding
Book 2, Shattered Dreams tells us what happened 12 years later, when Rama and Sita along with Laxman are sent to an exile into the forest. Despite Rama trying very hard to convince Sita to stay back in the city and explaining the dangers of the forests that they encounter on a daily basis, a very stubborn Sita insists that she’ll follow Rama wherever he goes. With no other option, he finally agrees and thus begins an eventful journey to the deep forests, the later part of the story many of us would be much cognizant of 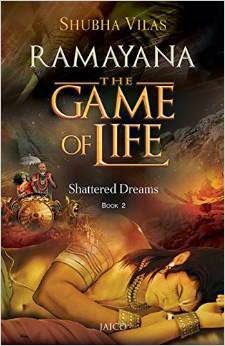 The book unlike any other mythological novel not just explains the story of Ramayana in simple words that almost anyone can understand. But it also delves into the inner meaning of the story drawing parallels to everyday life and what are the guiding principles one should follow like Rama. The epitome of beauty, knowledge, intelligence and divinity, there are a million things one can learn from Rama, and this book does exactly that. They say each and every action has a deep meaning and thought process behind it and such thoughtful actions can lead us to a long way
To write a small excerpt from the book

“Yet, one corner of Ravana’s mind kept drumming about the realities he was probably fleeing from .The easiest way to evade truths was to shrug them off as fantasies  spun by fertile minds , rather fearful minds “

“The most convenient way to handle a problem is to assume that the problem does not exist. Just like an ostrich buries its head in the sand in the face of a calamity it cannot handle, a man turns his face away from a calamity when unable to deal with it.
Neither the ostrich nor the man need ever face such a calamity again, since both of them will not survive to encounter another calamity again, anyway “

The above is one among thousands of examples in the book, enlightening  us with a  deep inner meaning one can learn from this epic novel and try to adopt to its methods
Rather than any mere “Self help books” which dishes out advice on things to do and not do , The Shattered Dreams is actually a guiding novel that illustrates a mythical example to help us understand the situation even better to be successful in life
The Shattered Dreams is based on Valmiki Ramayana as well as partly leverages Kamba Ramayanam and demonstrates how much of this epic holds huge relevance even in today’s modern life
In that I should highly appreciate Shubha Vilas in writing this epic two novel series, and helps us relive the joy of reading the Ramayana again in a completely different format , like never before
As goes without saying , this is a must read for everyone , be it a teenager or an old person and even better if one can start following it
You may purchase this book at Amazon : http://www.amazon.in/Ramayana-Game-Life-Shattered-Dreams/dp/8184955316
This review is a part of the biggest BookReview Program  Indian Bloggers. Participate now to get free books!