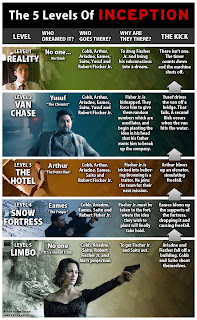 Having witnessed an amazing spectacle or rather a manifestation of infinite brilliance , I was awaken from my deep hiatus in the blogging world to write a review or rather a mere ode to what critics might call , one of the best movies of the decade – ‘Inception’

Christopher Nolan begins with his usual style of narration, a jumbled “jigsaw” screenplay , as seen from all his previous movies , including “The Prestige”, “Memento”, “Following” “Batman Begins” and goes on to do what he does best – Film Making.

With a flawless execution and an ingeniously brilliant idea in mind, he takes the viewers into a never ending journey into the infinite dream states of the mind,one could ever imagine, or rather “dream” . There has been several discussions all over,debating whether the totem keeps spinning infinitely(Dream state n-1) , or did it
actually begin to wobble slightly to come to an end (The Reality), as the film credits rolls by in the screen.
The movie also gives complete control and liberty to the viewer on its entire assumption and the whole platform the story is built upon
Someone even tweeted “10 years down the line, Inception will be a Religion”

And here i give you the freedom to let you decide upon your perspective.of this phenomenon

I am still dreaming, probably in my “n-1” dream state , as the totem keeps spinning on its indefinite course…

Impact of IT Revolution in India