Spoiler Alert : This post might mainly revolve around the future of technology and the ongoing battles between the major giants, and could possibly come off to a be tad boring to my “loyal female audience” ,as I dwelled and pondered long enough about my blog theme in my last post .

THE LAW OF DUALITY:
“In the long run, every market becomes a two-brand race.”

a. The battle usually winds up between two major players, usually the old reliable and the newcomer.
b. In a maturing industry, third place is a difficult position to be in.
c. The customer believes that marketing is a battle of products. The kind of thinking keeps two brands on top. ‘They must be the best, they’re the leaders.’

THE LAW OF THE OPPOSITE:
“If you’re shooting for second place, your strategy is determined by the leader.”

a. Whenever the leader is strong, there is an opportunity for a no.2 to turn the tables. In strength there is weakness.
b. Discover the essence of the leader and present the prospect with the opposite. Try to be different not better.
c. Present your products as the alternative to the leader.
d. The first brand that captures the concept is often able to portray its competitors as “me too’s 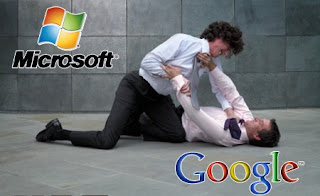 The War between the two giants, Microsoft and Google , had a late kickoff ,with the intensity increasing only after Google’s buying out of Youtube while their search engine share expanded in a major way on the other hand.
They competed in several categories such as video sharing sites, Operating system, Browsers,
Office Suite Applications, Mobile OS,Email service and finally the search engine market.

Microsoft’s response to Youtube , in the form of “Soapbox” and “MSN Video” failed miserably
and have recently announced that they are scrapping the Soapbox site.The feud increased when Google launched their own Google Chrome browser to challenge the likes of IE and Mozilla ,though its still in a wait and watch mode ..
Both Google and Microsoft were quick to adapt to the cloud computing strategy , as both of them launched their own suite of Office Apps. Google , with their Google Docs, Spreadsheet
while Microsoft replied with their Windows Live and their soon to be released Office Online 2010

As seen above , Bing , the new search engine from the Microsoft guys, was launched in June ,
but haven’t succeeded in creating even a tiny dent in Google’s Market share .
Even the 5 % share acquired by Bing has simply been acquired from their already existing search engine services which included MSN search and Microsoft Live Search 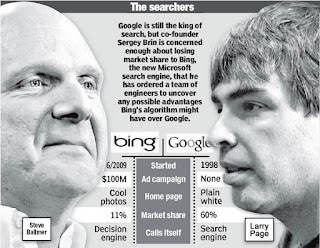 As quoted by Tim Berners Lee,the founder of the world wide web , the search engine market is still in its infancy. From evolution of a simple search
engine concept by Google , it now stands in Intelligent Search , where a search portal can determine what the user actually requires and returns an answer rather than a mere list of websites which contains that keyword.
For example , a search query of “List of Chinese restaurants in London” would actually return a list of these restaurants , rather than displaying several hotel websites which contain the corresponding information

Instead of doing Google-type searches, researchers using Intelligent search can enter a query and get answers categorized with relevance and solve their problems — all in real time

Microsoft after facing several charges of anti-competitive practice from the EU regarding its bundled softwares and browsers in its previous operating systems like XP and Vista , has come out with a new statement in relation to its future releases . The policy reads , Microsoft will no more offer their Internet Explorer in its Windows 7 Operating system and would simply offer its users a list of potential browsers , which they could download from the internet .
Ironically the list would also include their arch rivals Google Chrome and Mozilla Firefox

The future of technology and its accompanying bounty lies in a simple handheld device – a mobile .The race to a Mobile OS has already heated up with the same companies again competing for the top ,which includes Windows Mobile, Symbian OS, Palm OS and last but not the least, Google Android.

The introduction of high end mobiles like IPhone,HTC , Palm OS etc has also given rise to mobile apps.A mobile application can be developed by any developer , who just needs to download a SDK (Software Development Kit) from the net , and starts developing his own application , which can range from a simple calculator to a mobile game or any graphical & tool.The developer can then sell these mobile apps in several sites, where users can pay and download onto their respective phones.
The mobile phones are further being developed to also act as a global positioning device to help people navigate across different places , by providing local traffic and route information
on the move.