As my friend quotes,
“100 years ago, when a black man becomes president ,people said pigs would fly. 100 days after Obama swearing in , Swine flew ! “

We are witnessing a nation that is crippled and bound in panic because of a flu disease, which has rocked the people out of their minds, to live in fear, as to when they might catch the disease. 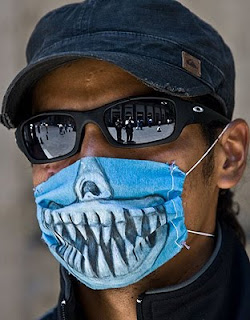 A country, which stood unflinched when earthquakes and Tsunami struck killed thousands of people, or when the dreaded AIDS drifted into the society, is now cringing in fright of a disease, that has been blown out of proportion by the media

A nation where, even major injuries and health problems are simply treated with potions of herbal leaves, turmeric and powder; where mineral water is simply unheard of in most places ; where dustbins have simply ceased to exist , and roads have been turned into spitting places and ironically is now fearing even for the smallest cough or a mild fever and rushing themselves to get tested.

“ The only warning label people really respect is ‘dry-clean only.’ Y’know what I mean? Speed limits, lung cancer, cigarette warnings – your very life is at stake! People go, ‘Ah, the hell with it!’ But dry-clean only? ‘Oh, don’t put that in the wash! It’s dry-clean only! Are you crazy?!’

The media, whose primary responsibility is to educate people about prevention of the flu, improve awareness has turned into a frightening monster by extrapolating the no of deaths in every city and showing graphical images of deaths across the country.
Schools have cancelled their assemblies, malls have shut down, theatres have postponed new releases, esp. over the weekends to avoid mass gatherings, and offices have turned into operation theatres, with almost everyone wearing a mask. Railway stations, bus stands portray a dark figure, each one fearing whether the virus is lurking around or if the next person has caught the flu.
Only a handful of news channels including NDTV has been brave enough to ease the ongoing panic by stating that, its not necessary to wear masks , to have a normal social life and not to consume Tamiflu at any point of time, unless prescribed by the doctor , under extreme fever. They were also right to point out that more people die out of TB, Cancer, Aids ,and more importantly road accidents by the hour.
This is not a post to provide “de-information” to the people or venting out my anger on people’s crazy fear. I am neither unpatriotic nor uncaring. I am simply appalled by the mere ignorance of so called literate people who spreads rumors and alarm people .
As they say in Batman Begins

“A vigilante is just a man lost in the scramble for his own gratification. He can be destroyed, or locked up. But if you make yourself more than just a man, if you devote yourself to an ideal, and if they can’t stop you, then you become something else entirely. A Legend ! “

A man from Rajasthan

7 thoughts on “A Masked Nation”