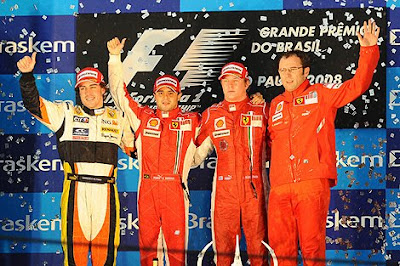 Is there a single Ferrari fan on earth who wouldnt have shed a sympathetic tear for Massa ?

Who in the world would have thought , that the F1 championship title would have been decided in the last corner in the last lap of the final race of the season , which actually leads us to the question, Who was the best man of the race ?

Was it Felipe Massa who drove an impeccable race , leading it from start to finish. Or is it Lewis Hamilton , who stole a championship , with the help of Timo Glock, who “incidentally” had a Tire Temperature problem causing him to slow down and give way to Lewis .

Was it the man who pounded his heart with his fist,lifted the trophy and showed the thumbs up to the millions of Ferrari Fans across the world , when he knew he lost a championship by one point or the man who claimed his maiden championship with a defiant aggression and domination.