The recent buzz in the celebrity branding , is that Katrina has replaced Aishwarya Rai as the brand ambassador for Nakshatra Diamonds , one of the most coveted diamond brands in the country

The brand Nakshatra (‘the brightest circle of light’) stood for providing its connoisseurs, who are aware of, and can relate to special touch of a diamond, and an accessory that can truly make a woman sparkle and stand out. 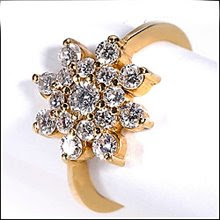 Quoted directly from its brand owners , “It made one look good and feel good and stand out in the crowd with the circle of light. Diamonds have always had a very significant role to play in the life of women. Nakshatra Brand of Jewelery only emphasizes this and makes the customers believe in it.”
The director of Diamond Information Centre ,says “The Nakshatra woman is mystical, ethereal and feminine – qualities”

Aishwarya Rai stood for all the brand values – simple yet classic, Indian yet contemporary , and an extraordinary beautiful woman . A Miss World , who stood out among other Indian women and made them gape in wonder,dumb stuck by her beauty , made every woman’s dream come true and an inspirational role model.She was also the pride of India , along the lines of Sachin and Vishwanathan Anand , bringing India glory several times.

In all a perfect fit for the Nakshatra brand 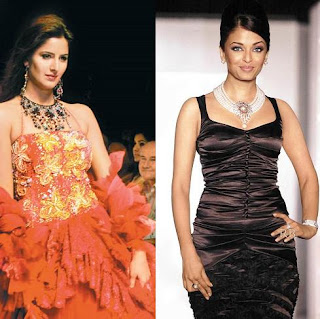 Katrina may be the hottest sensation in Bollywood , with a huge no of movies stacked up. She’s considered sexy, a ramp walk model etc.
But does she possess that uniqueness ,and grace that Aishwaraya has ?
Does any woman look upto her , as an inspiration for beauty or feminity ?
Probably Not.

Aishwarya Rai , may not have had a successful Bollywood(or even Hollywood)career, but she surely made heads turn , with her “grand” appearances in exotic dresses and jewelry in several films. Right from Devadas(the 50 Lakh Sari remember ?)till a Rajput queen in Jodhaa Akbar ,designers and jewelry brands have been flocking her throuhgout asking her to be associated with a brand .

Katrina has been known to portray the same , sexy and a glamorous heroine alongside a major star in a film .A role which anyone else, practically could have done it,much saner !

The reason Nakshatra says , they handed it over to Katrina , “She’s the next hottest sensation ,and top in the list of the current Bollywood heroines”
(Maybe they are passing it over from Salman’s Ex to his present girlfriend)

Whatever it is , hope those big bucks spending on Brand Katrina ,sparkles really well for Nakshatra

Brand Loyalty in a Cola? You must be kidding!!

IPhone : Too expensive for a Laggard market

One thought on “Can Katrina sparkle with the new Nakshatra?”