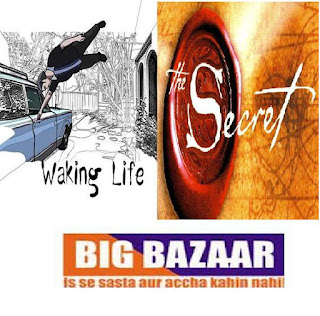 I guess people are wondering what on earth the blog title meant. Well for starters, it’s an attempt to link three interesting phenomenon I encountered in the past few days.

The first thing was a trip to Big Bazaar in Pondy Bazaar (Chennai, India) , a big ,fat and an ugly store that seriously stirs up a strong thought inside me and reconsiders the pathetic state of organized retailing in India

The second thing is about two people, who had expressed an almost similar thought in their blogs at the same time I had planned to write on an analogous idea.
The third one is the connector. A common philosophy and a strange event that happens in one’s life, being described in two movies:

The Waking Life: A brilliant thought provoking movie on dreams and reality. One of the things the movie talked about was, when people from different parts of the world, totally unrelated to each other, come up with the same inventions or a comparable idea at the same time. It makes one wonder, whether there is a thought process that travels across the world into minds, and strikes up a corresponding design

The Secret: Not really delving into the “secret” of the Secret, this one is an interesting point made by the author. When you are thinking about someone, say an old friend, the next moment they either see you somewhere or call you. Likewise, when you randomly think about a particular idea or subject, you suddenly get to read about it in the paper or TV or a website .A similar thought flow in place in the system of the world.

The Big Bazaar visit: A couple of days after opening of its new store in Pondy Bazaar, I visited the store with a mix of anticipation .It happened to be a damp squib after all. Here is why:

As evident from the fact that, there is a queue of people jus waiting to entering the store, on a weekend, as if they were dying to buy the newly released Apple IPhone

Do we call them ignorant, or do we begin to understand that retailing in India attaining to this level is itself a big achievement, and people have begun to accept mediocrity?

When I started pondering over this topic, two popular bloggers suddenly came up with a similar thought flow. Though completely unrelated or unknown to each other , the three of us have come up with a common thread and subject,at the same time –

The audacity and shoddy nature of the bigger brands or hotels and their failure to look into finer details of their service , with a proud confidence that irrespective of their service levels people will still keep coming .

The first one is Ms. Chinmayi , a celebrity blogger/singer writes about a harrowing experience at The Park Hotel in Chennai.

“I am glad we chose a-la-carte cos, though this is ewwwwy there was a small cockroach running across the buffet counter. There was also one more thing that I wonder about. 601 actually allows diners to smoke. But are there probably rules that say that the smoking and non-smoking sections should be separate? If someone goes to an upscale restaurant, as much as they are entitled to the ambience, service and whatever else that is assumed, clean air is also one of the things if you ask me. Why should I breathe in someone else’s cancerous air and also pay a premium for it?”

The other one is Professor Ray Titus who says :

“That organised retail store shopping in India is an experience akin to a nightmare is no secret. From dirty stores to poorly merchandised goods to indifferent retail personnel, the list is endless. Yet most retail stores seem to draw consumers as the other choice available is a bigger nightmare called kirana stores. Even some of the leading retail stores fail to take into account customers’ preferences, as they are yet to get down to the concept of ‘retail designing’. On parameters ranging from accessibility, location, window display, facade, staff, packaging, decorative & props, ambiance, and interiors, retail stores do not consider the likes and dislikes of their target consumers.
Even if it weren’t, a rupee here or there wouldn’t make much of a difference to me. I’d rather pay for retail calm than gain a rupee and face chaos that gets to me.”

My theory is that everything is connected. Be it a poor service in a five star hotel, or a pathetic state a store like Big Bazaar is being operated , it all boils down to the inefficiencies and lack of discipline in the entire system , and consumers inability(or even laziness) to oppose them ,or even to question them which has caused a major disruption in the Indian Scenario .If brand “India” should no longer be known for its traffic, bad roads and defective or cheap products ( a similar image that China has completely moved away from in the last couple of years ) , it can be only done , when people begin to become disciplined and refuse to start accepting mediocrity, (for the huge prices we pay to these big brands) .

It’s just not with the people. The entire society has to transform completely, a one similar to the United States, where there is complete transparency in the legal and consumer forums, and the public has a far higher voice than the companies, as evident from the fact that even a small man can easily sue a major brand for millions of dollars, if one of the products fails.

The same thing, if it happens in India, the guy remarks ,just a piece of my bad luck or this is all I will get for what I paid.
This scenario is only till Big Bazaar maintaining almost a monopoly in the hyper market industry in India.
If the likes of Wal Mart, Target or any other International brands arrive into the Indian Retail scenario, its gonna be a rude awakening for the people and realize the international defined standards for the retailers and definitely a big fright for the existing players
(The same pinch and shock Indian Airlines got , when the Govt opened to several private players. Their incorrigible food,worst service being a public outcry ,with the likes of Jet Airways,Kingfisher or Paramount providing world class service and outclassing them in every aspect)

The day when the big brands are more conscious and redefine themselves in way which offers the same standard of service even to the smallest of their consumers, and starts improving themselves to prevent mistakes and therefore any subsequent law suits and damages by the consumer,

then my friend , I accept Indian Retailing is organized or to that matter India is really developed !

Retail in India : Is it still taken for granted ?