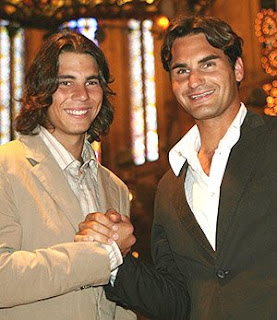 Is this just a game of tennis at the end of the day or a war between the masters at the prestigious centre court in Wimbledon?

Is it just a game full of forehands, backhands and aces or a pride display of the finest skill, perfected throughout their lifetimes trying to better his opponent with an even powerful stroke?

Is it just a Championship final or an enthralling encounter of the game’s best players battling out among the thundering downpour in a gruelling five setter, stretching out to almost five hours and still retaining that last bit of energy to stay in focus and win the game?

Was it all for that golden trophy you get to lift when you win the game, or for the standing ovation you receive from the thousand and odd crowd in the finest of suits, saluting you as the champion of the world

Was it Nadal who just etched out an extra point against the Swiss King, Federer, to stop him from surpassing Bjorn Borg, the better player or is it Federer, who finishes second and admits to saying

“I tried everything”, the better man at the end of the day?

Reminds me of a Rudyard Kipling poem. it goes like this

” If you can dream–and not make dreams your master,
If you can think–and not make thoughts your aim;
If you can meet with Triumph and Disaster
And treat those two impostors just the same;
If you can bear to hear the truth you’ve spoken
Twisted by knaves to make a trap for fools,
Or watch the things you gave your life to, broken,
And stoop and build ’em up with worn-out tools

If all men count with you, but none too much,
If you can fill the unforgiving minute
With sixty seconds’ worth of distance run,
Yours is the Earth and everything that’s in it,
And–which is more–you’ll be a Man, my son!”

One thought on “Game, Set and Match Nadal !”