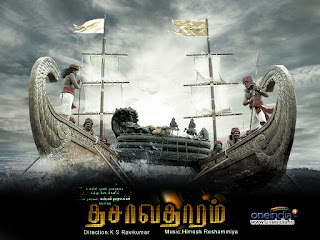 A “National Treasure” kind of movie , filled with action,chases,fights,humour and
a guaranteed 3 hour non-stop entertainer, Dasavatharam has delivered all that
it has promised to its devoted Kamal fans all over the world.

As always, Kamal is spectacular in all the ten roles he has played ,with a mindblowing performance.The real genius in him lies when , the audience actually forgets
that the characters are actually Kamal and treats them as a normal character.

Be it the Ex-CIA guy , or the Nambi character or the Telugu Police Detective ,
or the old lady , Kamal can never have done this better.

I do not wish to reveal much about the film , as it is much better to experience ,
the true intricacies of the film . With a few graphic scenes removed ,
changes in the scenes where Asin comes and a much bigger role for the
Japanese fighter , Dasavatharam could have easily scored ten on ten.

Despite all of them , it sitll gives the audience a grandeur ,an enormity
and a guaranteed fun filled ride all along.A must watch for all I must say

One thought on “Dasavatharam – A review”