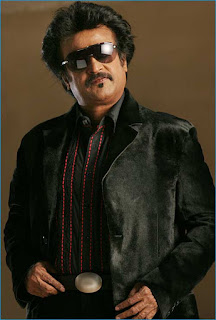 June 15 : Schools ,Colleges and offics were deserted. It was not a national holiday.
It was much bigger than that.
It was the release of the much awaited movie of the millenium ,and the biggest India has ever seen.A 65 crore movie …
What more can it be than a Rajnikanth movie directed by Shankar , music by Rahman ?
Can the stakes be ever higher than this ?
But the greatest satisfaction comes when the movie comes out in top throttle.
It is nearly impossible describing the enormity of the movie , the splendor , glitz and glamour surrounding it ,the visual array of stunning and unbelievable sets in songs ,
and most of all Rajnikanth.
What do i say abt him . THALAIVAAAAAAAAA . Noone else in this world can beat u..UR The one and only SuperStar
Sixukku apparam seven
Sivajikku apparam evan?

Be it the Athiradee song , or the punch dialogues , be it his comedy or the stunning sets in the songs , every aspect of the movie was visually rocking and mind blowing.

/* Spoilers */
The second entry of Rajnikanth from the helicopter as M.G.R (Boss – Mottai Boss) in the later part of the movie is just like eating a Italian Triple Sundae Ice cream on a hot desert .It cannot get better than this..(A dessert in a desert ..Wahhhhhhh)

The flipping of a coin , bouncing a chewing gum to his mouth , his way of seeing COooool , BOSS- .Motta Boss ..Amazing……….

The no of adjectives used to describe the movie was less than i had hoped to use cos i forgot them or I have struggled to decribe the visual magnificence in mere words.
Jus go watch it and have the experience of a lifetime..
The Sivaji movie and Rajnikanth has made me feel proud and boast of being a tamilian.. 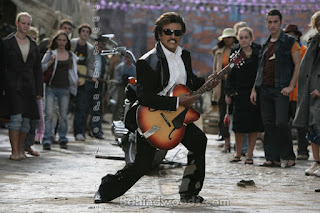 “CoooooLLL”
For better movie reviews, do check out Behind Talkies.

A Magical Evening by Rahman

2 thoughts on “Sivaji – A Diwali in Summer”