Skip to content
February 9, 2023
Uncategorized
I remember the times when I used to play those interesting fantasy league games online when the world cup and other ODI series used to happen. But it eventually died down with lack of support and promotions.

With the current IPL series happening in full swing, its the ideal time to test your cricketing knowledge skills and even make a quick buck as well.

Fanmojo.in is a micro fantasy cricket platform where a community of fantasy cricket enthusiast compete with each other by participating in free and paid leagues.
About Fantasy Cricket Leagues :
Fantasy cricket is a format of online gaming where users can compete with other users for free or stakes by creating their teams of 11 players based on upcoming cricket match event. The team is allowed to be created before the match event begins.  The winners are decided based on a point system which includes real player performance in consideration. The user team with maximum points at the end of match wins the crown and takes the big prize
Why FanMojo :
Unlike traditional fantasy cricket websites, Fanmojo.in offers Micro fantasy contests that makes it very easy for everyone to participate. Instead of 11 player team, users create their team by selecting top 5 batsman that will score maximum runs in the upcoming match event.
Karanpreet, CEO & Cofounder of Fanmojo.in added that , the main reason to go for micro was to make it simple and easy to understand for every age old group to participate. Post research, they also got to know that not many people were aware of this and only college going students were quite active in it.
To make it popular with mainstream audience, they adopted the micro fantasy format within the confines of the legal boundaries
“Fantasy games and esports are still novice in India unlike the US and will surely be more popular among mainstream audience. Things are just getting started.” adds Karan.
Origin of FanMojo
Fanmojo.in is started by team of two who are stanford alumni and experienced entreprenuers. Fanmojo.in was launched in April, 2016 and has about 5000 users signed up in a short period of time. The majority of users are College students and IT professionals who play regularly with average of 60-100 daily leagues played on daily basis.
How to Play
Playing at Fanmojo.in is very easy, Users can signup with facebook and select any upcoming match that he/she wants to play. 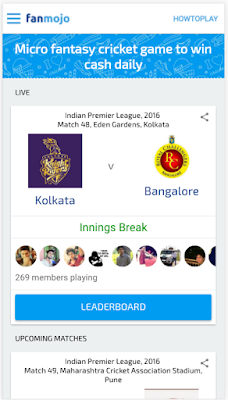 Winners & Payouts
After the match is completed, winners are assigned rank based on their total points. The prize amount is sent to their PAYTM wallet directly within one day. In case of a tie or match abandonment due to rain etc, entry fees is refunded back to PAYTM wallet within 24 hours.

Overseas Education – How to choose right college in UK

One thought on “Cricket Fantasy Leagues by FanMojo”