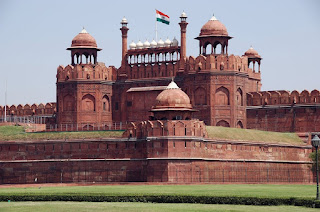 Am back here in the blogging circuit after an amazing trip to one of the splendors of India , Rajasthan and Delhi

Covering a distance of almost 2000 kms in a span of 5 days, it turned out to be a very long road journey covering almost several parts of Rajasthan including Jaipur, Jodhpur, Jaisalmer , Pokran, Ajmer , Pushkar & Delhi and back to Chennai. Yet it was an enthralling and unforgettable experience to be mesmerised by the grandeur and beauty of the forts and palaces

But what really struck me , was the phenomenal changes that has undergone in the nation’s capital in the past few years. Delhi ,since childhood has always fascinated me in several ways . One being the beautiful historical monuments like Qutub Minar,Red Fort lined across the city, the immortal beauty of the Taj,the varied culture prevalent in the city , the food and the pretty gals 😛

The same city though is now shedding its historical tag in lieu of becoming a highly developed “modern and a cool” city with its massive skyscrapers ,malls , discs and the dominance and rising fame of the shopping streets from Sarojini Nagar to Chandni Chowks , thanks to Bollywood cinema. Gurgaon , in fact looked like a shining jewel and resembled almost like New York ,at night when viewed from the highway

Not that I am against this trend of modernisation , it’s jus sometimes a sad state to see history being forgotten , and other factors come into place .Reports indicate that even the famous city tours have begun including the Chandni Chowks the famous malls etc and leaving out the historical landmarks . People heading out to Delhi are more keen in checking out the famous malls and the shopping areas , than seeing the landmarks which might be of a little concern , for “Brand Delhi” .Can the brand still possess the historical places as its key trait ,and unique selling proposition or will Delhi 6 / Chandni Chowk replace it ?

To me , Delhi is a delightful and an unforgettable place ,which i love dearly the same way I love my Chennai (not jus for the landmarks but for several personal reasons 🙂 , and I jus hope the history lives on for generations to come.

2 thoughts on “Delhi 6 to Chandini Chowks !”