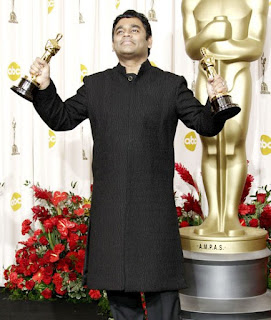 The moment has arrived . A moment to cherish, relish and revel upon.
A moment to savor , and feel thankful to all the gods.
A moment to squeal in joy and jubilation , to see Rahman’s pic splashed across all the papers in the country in almost every single page, with people pouring in with their wishes and love for this extraordinary , yet simple man.

For those who worship him as God , and be proudly called as Rahmaniacs like me , I must admit this is the moment we have all been waiting for .An award not to prove his greatness ,
but merely a statement to tell the world of his existence and to show them that we can beat them in their own field.

As far as Rahman is concerned, the award may not be probably for Slumdog , but just an award to prove to the world ,that this is just one entry point, to show them that we can redefine your music, in your own way .

It s a pity though , that some of Rahman’s brillaing masterpieces have gone unnoticed completely , esp in the North , since them being Tamil songs. Beginning from 1990 with Roja, until 2001 , Rahman’s Tamil –Hindi songs ratio was almost 80 – 20 , and considering that fact , it is still a sad state to see that barely, only one or two songs appear in his all time Top 10 list.

So considering that fact that most of his songs haven’t been recognized in his own country , it surely will be a long time ,for the global music arena to take notice of him , and his music. So the Oscar has given that first step ,, not just in the US , but within our country , to take pride in his work, and learning to appreciate all his compositions , irrespective of the language in which it is composed.

The two Oscars certainly came as a big surprise to a large section of the audience, for critics and even certain “Rahmaniacs” admit, Slumdog Millionaire may not have been one of his best compositions , as compared to his earlier tracks like Roja, Bombay , Dil Se etc.
Yet, as luck would have it , Rahman broke into the Hollywood spectrum in music ,through this movie , and gave a completely fresh perspective on English film music with 13 spell binding tracks

As a pride owner of the complete collection of Rahman’s albums , in all languages , I have prepared my very own Rahman Top 20 and here it goes

Impact of corruption on Society