The recently released “Quantum of Solace” has been touted as the “the next golden age of Bond movies” , with a fast paced ,realistic and a much “humane” movie . Starting from where it left, it has certainly accepted to be a far better movie compared to Casino Royale , with Daniel Craig delivering a powerful performance in the movie with his solid fist fights and chase sequences. 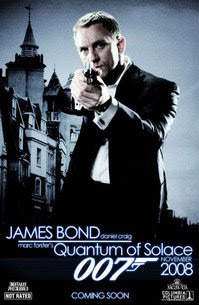 Yet, the movie seems to be missing on a load of factors , the usual Bond fan might expect to see.
For starters , the soundtrack of the movie ,”Another way to die”, by Alicia Keyes is a major letdown , especially for a “Bond song” .Who could ever forget the 007 song composed by Moby for all those Pierce Brosnan movies ?

The next major factor that might affect the movie is the “In-film” Product Placement.
Product Placement esp in films , TV serials and games has been on a considerable rise the past years , with more corporate tie-ups and sponsorship deals between the production houses and the corporate companies and media agencies.

A product placement is a type of marketing/advertising , where corporate companies make a deal with the producers ,to make sure their brand /product advertisement appears on the movie in an indirect way , and follows a non disclosure policy

Some of the recent examples for Product placements that I have observed include :

A James Bond movie particularly is quite renowned for introducing a whole new range of car models from famous brands , esp from the likes of BMW , Aston Martin, Volkswagen,Ford etc
This movie has certainly ain’t been spared , with a whole new range of product placements throughout the movie . The audience were more tuned in identifying the brand names in cars,cell phones, alcohol,laptops,watches etc, rather than being absorbed in the thrilling chases and fights.

According to IMDB , the product placements and brand integrations for this movie include :

I’m sure its a dream run for marketers and advertisers for their brands to be featured in a James Bond movie,which will be watched by millions of people across the world , but when it comes to the average moviegoer , I guess they’d prefer to watch an “original” movie rather than a “sponsored” brand movie.

So next time , in a movie ,the hero drinks a “Starbucks” coffee rather than just a coffee , you know what it is !

Do you know what you want?

Indian Railways : Have they really embraced the Web ?

4 thoughts on ““The Bond” Marketing”