As the five red lights illuminated, there was a gleaming smile across Bernie Eccelstone’s face . With the stunning success of the Singapore Grand Prix, the whole world witnessed a spectacular event next only to the Beijing Olympics reassuring a secure future for Formula One, despite the threats of a rebel grand prix series . Fernando Alonso pulled off a surprise win and emerged as victor, from a 15th place start, despite cribbing about the circuit, and the difficulties in overtaking in the street circuit, during the post qualifying round of interviews. 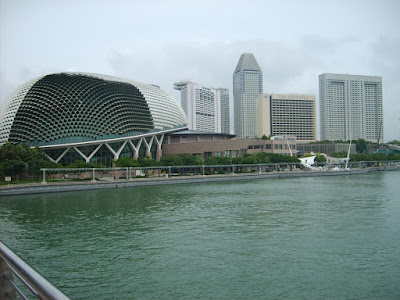 An extremely beautiful travel destination and a central hub for several connecting flights, Singapore is one of those rare cities, which mixes business and pleasure in a perfect blend and gives a memorable experience for anyone who goes there even for a day. Singapore has come a long way down, in making sure the race was conducted in the best possible way , with awesome lighting effects , excellent road conditions and wonderful organization creating several records in the process.

With a clean start by the top three of F1, it was bound to be a predictable race with the near impossibility of overtaking in the Anti-Clockwise Singapore street circuit. But with the retirement of F1 legend Michael Schumacher, the sport has become anything but predictable. Pole Positions in qualifying has literally become meaningless with almost every team (except Force India of course. lol..) having a fair chance to win the race or at least a podium finish despite their starting position.

With the crash of Nelson Piquet Junior, it was the turn of the inevitable safety car to lead the race, as the huge leads built up by the Ferraris and McLaren came crashing down.

Despite all the glitz and glamour, it was a bad day for Ferrari and its million fans across the world. Ferrari’s chance of a championship victory, with Felipe Massa on the lead, was almost doomed, after a horrific pit stop incident, when one of the pit crew failed to take the fuel pump from Massa’s car, meanwhile Felipe was given the green signal to go.

Adding fuel to the fire, the steward handed him a “Drive thru” penalty, further inhibiting his chances to finish in the top 8 .The problems didn’t just stop there .Kimi Raikkonen driving a near perfect race , was forced to wait behind Massa in the Pit stop, while the safety car circled the circuit as the debris of Nelson Piquet Junior’s Renault was picked up . It was further followed by a 150 mile crash by the Finn and his chances of qualifying to the top three were also over.

The woes for Ferrari continue for the nth time, with several pit stop problems, engine failures, signaling problem, mismatch in communication (as evident from the fact that Kimi and Massa came in the pits at the same time) and so on.

As far as Lewis Hamilton is concerned, yeah I do admit you’re a rival to me and I must hate you, just as the way I hate Arsenal, while supporting Manchester United.But I have to give it to you.You’re simply terrific, aggressive and determined to the max even in a car like McLaren!

Hope to see several F1 races there in the future , though with a modified circuit and track conditions.