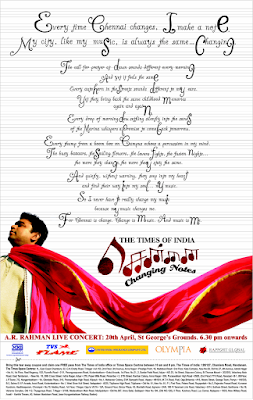 In an already cluttered paper market , with The Hindu , Indian Express and Deccan Chronicle dominating in the Chennai segment , apart from the several other business dailies,
Times of India has pulled off a successful coup to enter the market and in a grandeur way

With an amazing ad , featuring The Mozart of India ,A.R.Rahman playing his piano and talking about music , and announcing the eagerly awaited concert to be held on April 20 in Chennai :),
an introductory offer of giving bags and flasks for yearly subscriptions and a free coupon to exchange for a free Rahman concert ticket ,inducing the people to buy the paper ,not just one but in large nos on the opening day (I myself bought 4 copies) .Any IMC campaign can never get better than this .

Indian Express on the other hand has brought out the worst TVC ever possible , forcing people to change the channel immediately , and even became desperate by issuing free copies at several places.

Three Cheers to the Ad Agency and the PR Team for crafting a brilliant strategy for Times of India !

A Magical Evening by Rahman

2 thoughts on “Times of India – Rahman Live in Concert”