Skip to content
February 9, 2023
finance / technology
The current staggering rise of mutual fund investments in India has sparked a major revolution in the field of investments and savings. Earlier people investing in stocks and mutual funds were usually restricted to businessmen, small time traders and corporates trying to reduce their tax burden, while aiming for a quick profit in the small run. It’s no longer the case. Almost anyone, be it an IT professional or an entrepreneur ,the average middle class earner or even bloggers for that matter have now shifted their attention to Mutual Funds, SIP’s(Systematic Investment Plan), stock markets etc. The awareness for mutual funds in India has seen a sharp growth in the past couple of years , with people clearly weighing its benefits , than having cash at hand. This Mutual Funds Startup Guide should get you started in the right track 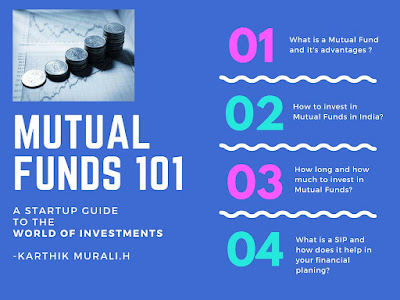 When it comes to saving money, we have always come up with ingenious methods of doing so. People generally preferred use traditional techniques of keeping a portion of income in steel cupboards / lockers while spending the rest for running the household. Investment was never really a thing in the age old days, as cash in hand mattered a lot. The use of plastic money(Debit/credit cards) was sparingly used and it was a cash economy all around. Slowly, with high rates of inflation, and depreciation of currency, people began to thinking of ways to divest the money in different scheme. Esp  the “get rich quick” schemes which people invested in made people lose a lot of money.

Exactly one year before, Nov 8 2016, the Govt announced the Demonetisation plan. This created shockwaves for those having large sums of cash at hand. They were neither able to convert into new currency nor able to deposit in bank accounts quite swiftly. Only then people understood the more viable alternatives of investing in deposits and mutual funds that could be really beneficial in the long run. 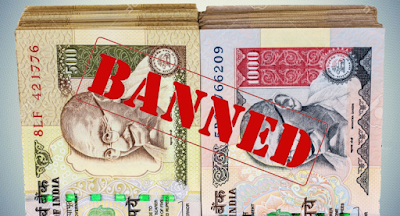 There are people who never believe in the concept of tomorrow and spend most of their cash today on experiences, things and material. The rest of them try to save every little bit of the hard earned money and look for ways to multiply those savings, without any risk. Their primary option was gold and land, but the subprime mortgage crisis and fall in gold prices (because of fall in crude oil prices) have made it an unreliable option too. Plus land is something that can’t be liquidated immediately, which brings us to the question of which is the best way to earn interest out of your income.

Why Fixed Deposits are a thing of the past ?

The first thing that may have come to your mind when I say “bank investment options” would have been Fixed Deposits in a bank. A portion of your money is moved to a separate account which can’t be operated for a fixed period of time and gives a relatively higher rate of interest than a normal savings account. A savings account normally gives a rate of 4%. 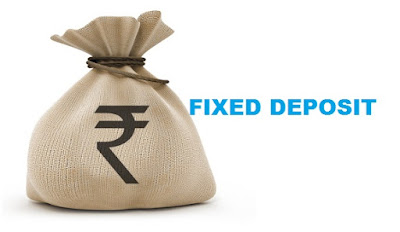 The fixed deposit interest,  that matures after a year or whatever the period you have selected, is on an average 7-8% depending on the bank. Even this interest percentage has seen a huge decrease over the years thanks to the Govt’s policies. Despite earning this interest after a year or two, you still end up paying an additional income tax on these fixed deposit interest earned. This will be based on your income slab, that’s ideally anywhere between 5-30%. So at the end of the day, if you are a high-income earner, you end up getting only a meagre 4-5% extra, after paying for tax on interest (which is pretty much the same as your savings account average).

The second option would most probably be a Public Provident Fund. The comparative rate of returns and declining growth in the interest %, adding to inflation rates as well has made it a very unattractive option.

Ok so what If I tell you, there’s a third option. An option, that can pay you nearly 3-4 times the interest earned through Fixed Deposit and the dividends earned is completely tax exempt and completely safe, easy to manage. Yes, that option is nothing but mutual funds and it’s very much true as it sounds.

What are Mutual Funds?

To put it in layman terms, a mutual fund is a trust that you invest in. The trust is handled by a fund manager. The fund manager takes your money, along with the money others have invested in the same trust. This pooled money is then divested in different portfolios (stocks) over a relatively longer period of time in varying proportions. Having expertise in stocks and volatility, the fund manager will ensure it’s invested wisely and can expect a sizeable rate of return. 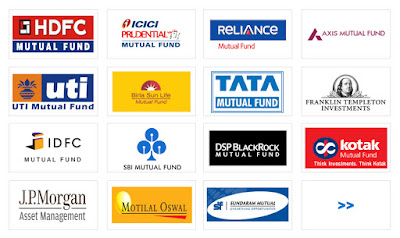 For example if you are buying an item and ask for a discount, the shopkeeper may refuse to do so. But if you are joining with 10 other people to buy 10 units of the same item, then you might even be offered a 20% discount. This 20% discount is then your net savings. An investment from a mutual fund investment in India, is always several times rewarding than a self-investment.

Why can’t you invest it yourself? 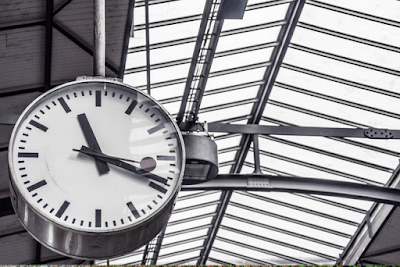 With such a busy life, the last thing you want to do is study stocks, understand the stock market trends, create Demat accounts, invest in the right stocks that might give you a high rate of return, with the least possible risk of your money.

Additionally, mutual funds not only invest in shares/stocks but also in money market instruments, which include

Yes, it’s a lot of effort and never a foolproof method. Sometimes even losing money is a high possibility, if a company doesn’t perform well in the previous quarter, while the stock market reacts sharply against it.

A fund manager, hence gives you that security and expertise cover that you require and also diversifies the money among different stocks. This reduces the risk by a great margin, at the same time guaranteeing profits and a sizeable rate of return.

Why do Mutual Funds give a higher rate of return than others?

Mutual fund is technically a collective fund from many people. So the money invested is several times higher in comparison to a simple direct investment in any other scheme. 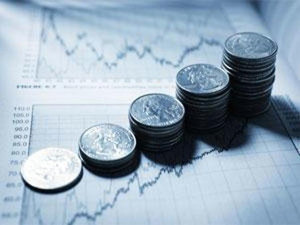 Like any other industry, greater the value of the investment, higher the possibility of a good rate of return and income. This is directly passed on to the primary investor. The profits are split equally in terms of the original proportion of investments.
Third, the money invested is across a number of companies operating in different sectors in different industries. This diversification prevents any shortcomings as well as able to compensate for any negative fall in a stock.

The primary concept of a mutual fund is a diversified portfolio.  There are several companies in which you can start your mutual funds journey. While beginning with a mutual fund, you are presented with two options:

How do mutual funds work ?

How to invest in mutual funds in India?

If you are wondering which is the best and high earning mutual fund in India, you can get to know that through Groww.
All you have to do is simply login to the portal, select one of the ready made portfolios available, select a systematic investment plan as per your need, and start your portfolio tracking through regular updates. In case you wonder, Groww is a free service offered . Their services include getting your KYC done, getting all your questions answered, choosing the right portfolio/mutual fund plan and giving you regular updates on your investments. 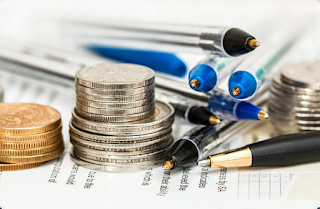 How long & How much to invest?

Before you set out for investing in mutual funds, decide how much you can allocate from your savings / income , what is your expected rate of return and for which event your planning for this. The investment can vary from as low as 500 rs to any amount upwards. The investment period can be as low as a few weeks to even upto 20 years or more.

You can either choose it to be paid like a dividend in periodic intervals (short term goal) or do a reinvestment of the revised NAV – Net Asset Value(long term goal). You can also keep the returns earned in the fund are retained on the value of the NAV.

Of course, you can buy multiple units of multiple mutual funds, but this only works against your favour. Diversification of a “Diversified” portfolio only reduces the rate of return without adding any further value to it.

The Short-Medium-Long Goals of Mutual Funds 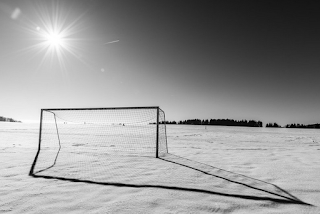 Any investment done for less than 5 years is considered a short-term goal, less than 10 years to be a medium goal while the goals stretching up to 20-30 years is a long-term goal. Some people would find it difficult or feel riskier to invest all the money they have in mutual funds alone. Therefore similar to an EMI Payment, you can pay the amount through systematic instalment plans called SIP’s.

Why SIP’s are important for you?

SIP stands for Systematic Investment plan. SIP’s helps you pay in small monthly instalments (even as small as 500Rs), to easily begin your foray into mutual funds. This eliminates any fear of lump-sum amount being spent on unknown territories like mutual funds.

So every month you end up buying a fixed no of units based on the current Net Asset value of the mutual fund (which usually tends to go up and down). 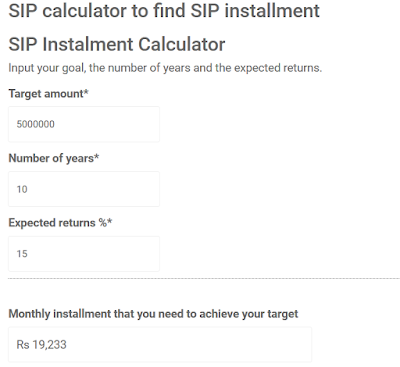 The sip calculator works in two ways. You can either set your monthly investment, rate of return and period and you’ll be provided with a final value of investment. As you can see from below example, spending a meagre amount of just Rs 5000/month for a period of 10 years will yield you a huge sum of Rs 13 Lakhs post the tenure period. 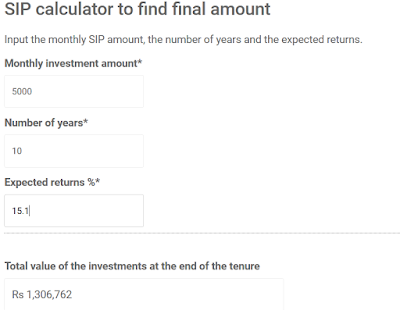 Else you can specify your target value, period and rate of return and it’ll tell you how much you should allocate each month on this. In order to earn 50Lakhs in 10 years with a 15% return, you are expected to pay 20K per month.

Some of the top advantages of a mutual fund are as follows :

So what are you waiting for? Begin your foray into the world of mutual funds, slowly and plan for your future already!

As with any investment schemes involving stocks and trade, these mutual funds are also subject to market risks. Hence after this mutual funds startup guide, read the terms, conditions, offer documents and everything else carefully before you proceed to invest