Skip to content
February 8, 2023
#colgatemagicalstories
If I were to name the few amazing qualities present in most kids, I’d probably say it would be their innocence, the creativity, learning skills and of course the way they come up with stories.

The way, kids look into a situation or scene is entirely different, from the way we see it. They see everything as a story, filled with characters, imagination and interesting things that can capture their rapt attention. The recently released movie, “Tamasha” also happened to highlight this in quite a beautiful way. We probably imagine things only in a dream, but to a child it’s always a story that’s unraveling in front of them.

My interaction with several of my cousin’s kids and neighbors kids has given me interesting insights and an idea of their imaginations. Immediately after school, they come back with fresh memories, new stories, almost on a daily basis. It may have been a small incident that happened, but to them it was a story that had a beginning, middle and an end.

I remember this one time when my cousin’s kid had gone on a big trip to Singapore with his parents and family. The trip included a visit to a big aquarium which consisted of thousands of fishes, sharks, whales and other sea creatures.
When the kid had returned and I happened to visit him, what I got to see wasn’t just a photo album or a video of his visit. Instead the kid chose to recreate it by describing the whole scene as a story.  With the help of sea animal pictures cut out from the specially designed Colgate Strong Teeth Pack, he began to craft his story.

The story began right from the entrance where he was enchanted by the giant building that hosted the aquarium, which also happened to be in a tunnel form. He referred to this as the underwater castle, which he obtained from the pack, by cutting out neatly along the dotted lines

He began by giving a creative name to all the fishes he had seen in the aquarium. One of them was of course his favourite Nemo which he happened to recollect from the famous movie, Finding Nemo. He began by telling how these fishes and sea horses were all housed inside one giant huge aquarium. He said that the fishes were also part of a big gang and the sharks were the villains. 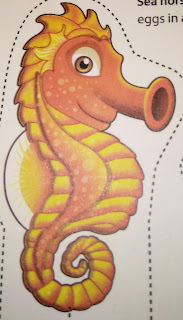 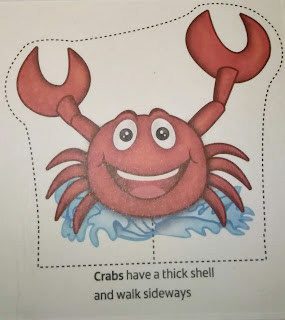 In particular Nemo was the most favourite among all fishes and was the head of this gang.  The sharks were the villains, which kept attacking them and eating them. These fishes began to then swim away quickly before the sharks could swallow them.

At a later stage in time, the sharks were then transferred to a different tank while the fishes were kept separate. This allowed a fearless movement for fishes and they were now much safer, thanks to the true heroes in the form of aquarium guards

If I was in his place, I would have probably have described this whole incident in a couple of lines, saying that I had been to an aquarium and happened to see lots of fishes and sharks. But instead, I was surprised at this kid’s imagination and creativity to come up with a beautiful story in a simple visit and the impact it had on the kid.
To me, this is the most amazing attribute any child has and it should be encouraged and motivated in every way possible by parents. This can also cultivate him/her to become a fine artist (be it painter/singer/dancer or even a Drama artist) in the future, which also happens to demand a lot of creativity.
On these lines, Colgate has come up with an interesting activity to boost children’s story telling creativity. In all their Colgate Strong Teeth packs, they have added interesting sea creatures and some trivia inside them. There are 4 different packs which kids can cut, play & learn as a part of  the #colgatemagicalstories initiative
Here’s a few packs which I happened to collect (these can be cut into individual items and even made to stand on its own) to fit into a sand castle. 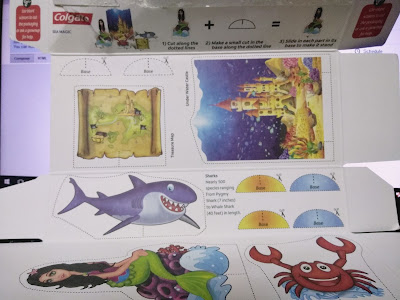 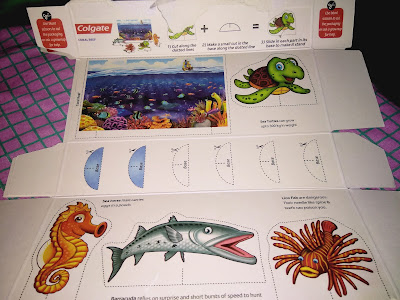