Skip to content
January 31, 2023
Uncategorized
Visaranai is a Tamil film released a couple of weeks earlier, based on the lives of four innocent men who are caught in the web of injustice. The movie is directed by ace director Vetrimaaran, who’s earlier known for his critically acclaimed movies such as Aadukalam, Polladhavan. The movie is based on the novel called “Lock Up” written by M.Chandrakumar. 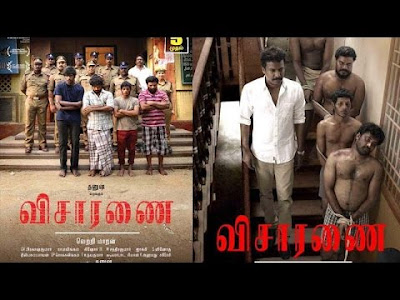 With raving reviews from press and social media timelines going frenzy about this movie, I decided to give it a shot. I least expected it to be such a hard hitting, impactful movie that I have watched in recent times.

People in Kollywood should definitely be proud that the recent spate of films has all been really good and definitely way ahead of expectations. Movies like Irudhi Sutru, Thani Oruvan etc. has definitely made a mark for itself, for its excellence in technology, film making and writing

Visaranai, on the other hand is a cut above the rest. A movie, probably made out of a shoe string budget, shocked the audience when it won the Amnesty International award and even premiered in the prestigious Venice film festival

Visaranai stands for “Cross-Examination/Investigation”, but actually depicts the reality in actual interrogation methods adopted by Indian policemen. In order to get the truth from the accused, they employ illegal methods and inhuman practices and coerce a confession out of them. This is a practice being followed for several years now, yet there hasn’t been a outcry against this illegal practice. Violation of basic human rights, denying fundamental rights is something very serious and should be prevented at any cost. Visaranai aims to do just that and has succeeded in its mission perfectly

The film also portrays the way some criminals are caught and brought to justice, while the legal system is glorified in the media. However that may not be the actual truth behind it. In certain scenarios, the whole case may be a fabricated one, evidence could have been artificially created and people accused for the crime may be completely innocent

Based on true events, the movie is quite faithful to the book and has some stellar performances by the lead actors. An offbeat movie without any songs or melodramas, Visaranai has the exact impact, a movie of its calibre and potential should have

The real impact is felt, when your blood boils against the injustice meted out to those four innocent men by the ones, who were actually meant to protect us. This further impacts your conscience and it doesn’t allow you to accept such a reality nor the ending

Having said that, this however doesn’t take the fact that we have good governance and an efficient law and order system, which strives to provide safety to its citizens. It may suffer setbacks temporarily with conflicting political scenarios or lack of resources but nevertheless you still have faith in the system somewhere deep inside

This blog post is inspired by the blogging marathon hosted on IndiBlogger for the launch of the #Fantastico Zica from Tata Motors. You can  apply for a test drive of the hatchback Zica today.