Skip to content
February 8, 2023
Books
Being a member of the Blogadda book review club I’ve been fortunate to be in the receiving end of several best seller novels one of which includes James Patterson & Ashwin Sanghvi’s Private India .The most recent addition to this list was the best selling novel “God is a Gamer” from the Master story teller of India, Ravi Subramanian
Having read almost all his novels, you cant resist becoming a huge fan of this Indian novelist. Being a banker himself, he started with an explosive novel “If God was a banker” that talked about India’s banking industry and the several back channel deals and corporate fiascos that take place inside Mumbai’s banks. The banking genre being very fresh to the Indian fiction scene was a sure shot success and became a overnight best seller across all markets.
The novel was followed by two other intriguing novels , The Bankster and the Incredible Banker. The latest being God is a Gamer .
God is a gamer looked to be a runaway success and it sure as well didn’t disappoint me . Right from page one to the final it was an intriguing thriller talking in detail about all banking evils, including credit card scam, ATM Frauds, password stealing , phishing attacks and so on
The book also talks in parallel about the next generation social media, and the rise of online gaming right inside a social media platform and what companies do to adapt themselves while trying to survive the onslaught of change. For someone who loves reading upon corporate politics and technology corporate frauds, this book was a double delight and took just a couple of days to finish it .What’s more interesting about the novel than the average thriller is its relevancy and how much information one can gain reading about rise in social gaming era in Facebook with concepts like Farmville Saga, Candy Crush, Town Saga etc. 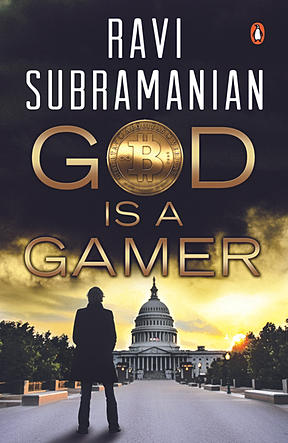 The book , despite being a banking thriller and tries to solve some gruesome murders, mainly talks about a currency revolution which is happening all over the world , in the form of Bitcoins. Touted to be India’s first Bitcoin thriller, it gives a reader a complete info on this new type of currency that is causing a major frenzy in the banking sectors. Having no centralized system or regulator, Bitcoin was a currency invented by a Japanese guy that initially started off as a Bartered digital currency which could be traded to buy products online and slowly started to become a full-fledged digital currency being accepted by many popular sites for buying things. Bitcoins became a government as well as a Banker’s nightmare having no way of tracking the currency exchange nor could it challenge the fact that a private individual do not have the right to create his/her own currency
The story revolves around many countries including US and India and Bitcoins being used to fund many high profile heists and murders and the police tracing every bit of clue to find the killers and the motive behind the same
I wouldn’t want to spoil the fun for any of the readers and really encourage everyone to pick up a copy and read it as soon as possible

This review is a part of the biggest http://blog.blogadda.com/2011/05/04/indian-bloggers-book-reviews” target=”_blank”> Book Review Program

for http://www.blogadda.com” target=”_blank”>Indian Bloggers. Participate now to get free books!

Harappa – A Civilization that went missing