Skip to content
October 4, 2022
Uncategorized
The second edition of the IPL finally drew its curtains last night with resounding success, as perfectly orchestrated by Lalit Modi . With 8 star studded teams , it was always predicted to be a exciting clash of the big players including the retired veterans , who still managed to retain and display their prowess and their hard hitting skills.

Unlike last year in India,the SA pitches proved to be a tough battling ground for the batsmen .The pitches were dead and flat , the ball didn’t come on to the bat , and proved out to be a paradise for spin bowlers and scoring runs became quite an ordeal . Totals of 170+ were hardly reached, and even 120 became a very competitive total to chase under lights in several cases.

The IPL almost belonged to the spinners, which included the greats of Warne, Muralitharan, Kumble and even Raina who were extremely economical and tough to play, against their spin. The pace bowlers, on the other hand suffered the demolishing onslaught of prolific batsmen like Hayden ,Glichrist and Sehwag who were simply a treat to watch , as they smashed countless sixes ,most of them disappearing out of the ground. Sreesanth might have had several sleepless nights and nightmares, after being totally demoralized and smashed by the big gutsy Hayden , who might have as told him “Think of a different career option, rather than bowling to me” 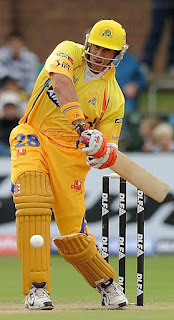 Hayden undoubtedly became the key performer of this season, with 572 magnificent runs with a staggering average of 52. His one hand sixes to deep fine leg , walking down the pitch to a pace bowler , as if taking a stroll to meet his other partner , and meanwhile dispatching the ball to a six , 5 quick fire half centuries , and a strike rate of 145 , the IPL couldn’t have offered more.
In fact the 37 year old was touted to be the best fielder amongst the players , with his brilliant catches, and diving fielding in the ground , which shamed even the 20 year olds who couldn’t even figure out where the ball was going to land ,or to throw directly at any of the six large stumps

Despite its adaptation from the English Premier League , the IPL has failed to replicate the football leagues in its points system or the league format and has almost become a huge disaster with two major upsets in the semis .

The English Premier League has 20 teams , with two matches between each teams , and the team with the highest points at the end of the 38 matches wins ( A goal difference comes in to play if there is a tie) and hence no concept of a semi final or finals

The UEFA champions league has a “2 leg” feature , where there are 2 matches of every semi final and the team with the highest goal difference (also higher “Away” goals) at the end of two matches subsequently qualifies to the finals ,hence completely ruling out any irregularities and upsets.

The T20 version, unlike its 50 over predecessor , is completely susceptible to major upsets and hence a direct semifinal berth to teams qualifying in the 3rd and 4th spots was a big mistake . Everyone predicted a Delhi vs Chennai clash (with the Super Kings handsomely winning the diamond and ruby enriched trophy , over the Daredevils ) . Yet , it became a Hyd Vs Blore finals , and turned out to be a major anticlimax finish to this exciting season and dearly losing out a major chunk of the TV viewers ,despite the promised glamourous closing ceremony featuring the hot fashion models, Akon’s performance etc .
In fact , Set Max even advertised a Deccan Chargers vs Super Kings final ,after the first semi , and had to change those copies immediately.

Coming to the marketing aspects , it has been learnt from the official figures , that all franchisees including the last placed KKR , has earned close to the 66.5 crores from the total bounty received from sponsors ,broadcasting rights and TV Ad revenues . The TRP Ratings for the IPL has completely dominated over all other shows , including reality shows and the ever popular TV soaps , and managed to convert a major chunk of even non cricket followers to watch this 4 hour of madness.

Vodafone , in fact found it immensely favourable to launch their ZooZoo ad campaigns , during the IPL matches , though its sales & ROI on advertising is still in great doubt ( Though experts might argue it doesn’t lead to direct sales and acts as only a brand value and brand recall enhancing concept.
My Question : They are absolutely adorable and funny, but is it worth spending so much ? )

Modi is contemplating 2 tournaments of this version in the same year , and even considering venues like US, Europe in the forthcoming years.
This might be a big profitable venture for him and his comrades , but it can prove catastrophic to the game of cricket as such , with the already declining Test Cricket format . In all fairness , England and Australia are the only venues , where one still expects a fairly large amount of attendance to the 5 day version , while countries like West Indies, India and even South Africa hardly sees a 5000+ spectator count for 5 days together.
ICC has to act strongly in order to save this enduring and brilliant version of the game .
Where else can you expect real strategies to come in to place, the batting captain declaring on lunch in the fourth day ,setting his opposition a fairly modest total with 1.5 days to go or the struggling team holding on to its final few wickets on tea on the final day , trying to play out its final few overs without losing any more wickets, with almost 7 fielders, just inches away and surrounding the batsmen to catch hold of anything red before it pitches in the ground.

On the lighter note , the Kolkata Knight Riders , managed to satisfy everyone’s expectations by losing 8 games continuously and finishing last in the table ,and got the distinction of being eliminated first.
I hope they stick on to their same game plan next year too