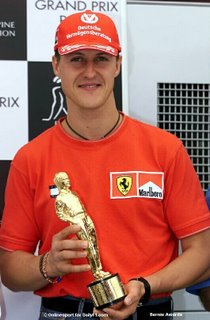 After an emotional win in Sunday’s Italian Grand Prix at Monza, Michael Schumacher has announced he will retire from race driving at the end of this season. His relationship with Ferrari will, however, continue.
“Words are not enough and whatever I could say now will never fully express how much I love this fascinating world of motor sport and all it has given me,” said Schumacher. “From go-karting to Formula One, I have lived through moments that I will never forget. I am profoundly grateful for everything I have had. I want to thank everyone who has accompanied me, supported and inspired me, right back to the days of my childhood. “Above all, a special thanks goes to (my wife) Corinna and our two children, who have given me the strength to do what I have done. All these years in Formula One have been amazing, especially those spent alongside my friends in the Scuderia. Soon my future will belong to my family, while I am happy to be still part of Ferrari. But for now, what matters is this world championship.”Schumacher has been with Ferrari for 11 seasons, securing five of his drivers’ titles with the team and contributing to six of their constructors’ crowns. No other driver has won as much with the Italian squad, who were keen to pay tribute to their great driver.”I had always said that the decision to retire would be his alone, but now that decision has been taken, I feel a sense of sadness,” commented Ferrari President and CEO, Luca di Montezemolo. “We have lived through some unforgettable times together, some good some bad, achieving results that will be hard to equal. To Michael goes the thanks of everyone in the company and supporters of Ferrari for all the dedication he has shown to our colours, for the determination and courage with which he has worked, which has provided immense satisfaction. He is both sincere and passionate and has earned the affection of all of us and of our fans. His relationship with Maranello will continue, albeit in a different form and I am very happy about that.” “Michael has been the author of a unique chapter in the history of Formula One and of Ferrari in particular. It has yet to reach its conclusion and what he has achieved extends over and above the results obtained,” added Managing Director, Jean Todt. “He is an exceptional man and will become a legend as a driver. For me personally, he is a great friend and together we have lived through unrepeatable experiences. Having had the opportunity to work alongside him has been and will continue to be a privilege.”Ferrari will announce a new team structure at the end of the year, including a definition of Schumacher’s new role.