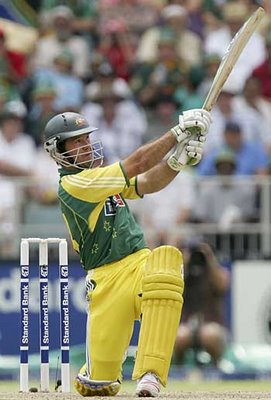 NEVER before, never again. After the most astounding, most exhilarating – OK,

the greatest – one-day match, there were no other conclusions to be drawn.

of 4-434, then a successful South African run chase? And how can you put into perspective a performance that has redefined the boundaries of possibility in
the limited-overs game?

The final match aggregate of 13-872 looked more like a pinball scoreline as it eclipsed the previous highest scoring game by 179 runs. Using the short
Wanderers boundaries, the thin high veldt air, a pancake-flat pitch and some poor tactical bowling to their fullest advantage, Ricky Ponting (164 off 105
balls) and Michael Hussey (81 from 51) steered Australia to 4-434 – the first
time a team had passed 400 runs in a limited-overs innings.
Having been shown the path to batting’s new frontier, the South Africans walked it.
No, they sprinted it. With Graeme Smith (90 from 55) already batting as if he had a cab waiting outside the ground with the meter running, the loss of the slow-scoring Boeta Dippenaar in the second over proved a blessing as it brought Herschelle Gibbs to the crease.

Gibbs is an extraordinary athlete. The son of a world-class sprinter who, because of his colour, was denied the opportunity to compete at the highest level under apartheid, Gibbs had been offered a tryout with Tottenham Hotspur and played rugby for South Africa’s combined
schoolboys side. But he chose cricket.
And it hasn’t been the smoothest of rides.

Banned for six months for taking money to throw his wicket in a one-dayer in
India in 2000, and generally regarded as a batsman of sublime ability but questionable temperament, Gibbs has angered and frustrated South African cricket fans for a decade. Perhaps now he has made his peace with them. His 175 from 111 deliveries might not have been the highest one-day score but it was almost certainly the best.

The record books now show that Gibbs set a new world record for boundaries (21 fours and seven sixes), posted the fastest century by a South African (79 balls) and the highest total by a South African against Australia in one-day competition. What the record books don’t show, however, is the sheer violence with which the ball thundered from his bat and into the grandstands. Or the look of exasperation on Australian faces.
Or the adrenaline coursing through the veins of the Wanderers’ crowd.
Those factors made this an innings thatmay never be rivalled in the limited-overs game.

Gibbs received a life when dropped by Nathan Bracken, but was eventually dismissed by Andrew Symonds. By that point, though, the Proteas were well and truly in the contest. Entering the final over, South Africa required seven runs for victory. Mark Boucher slammed the first ball into Brett Lee’s shin and scampered through for a single. Andrew Hall blasted Lee’s next offering over a short-ish mid-on. He wasn’t so fortunate the next time. Attempting the
same stroke from Lee’s third ball, Hall instead spooned a catch straight to Michael Clarke.
Three balls remaining. Two runs for victory. One wicket in hand.

Makhaya Ntini steered the next ball to third man for a single. And then , in a shot that will doubtlessly be replayed millions of times, Boucher drove Lee to the mid-on boundary.
As the ball sped away so, too, did he ghosts of the 1999 World Cup.

Graeme Smith didn’t have much to say after the match. The smile, the glint
said more than any words could. The choker tag was gone. The team that failed
to qualify for the one-day finals in Australia last summer had achieved the
impossible. Even Ponting, the vanquished captain who graciously handed over
his man-of-the-match award to Gibbs, described the game as the greatest ever
played.

And so it was.

The Grand Finale – Ind Vs Pak -As Usual Unusual

One thought on “The greatest the world has seen”